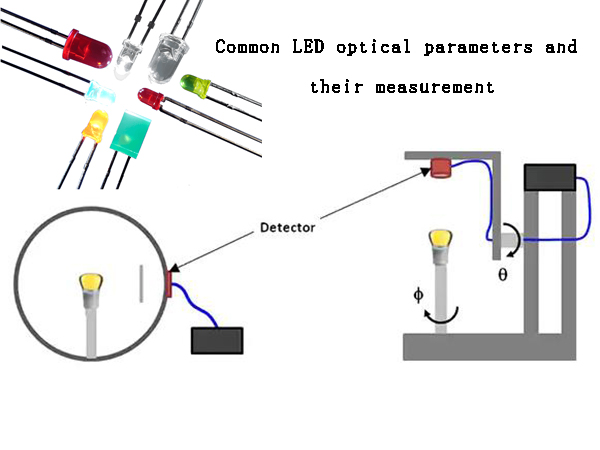 Like traditional light sources, the common optical parameters of LEDs include light measurement, radiance measurement, and color measurement. Among them, the most important and basic is the average luminous intensity and total luminous flux in the luminosity measurement. The following will introduce how to perform LED optical measurement.

The average luminous intensity is measured by placing a detector at a certain distance from the LED to measure the luminous flux projected on the detector; then the solid angle is calculated based on the area of ​​the detector and the distance between the detector and the LED, and finally the two Calculated by dividing by. Because these measurements are usually made at relatively close distances, in most cases, the light-emitting surface of the LED is not small enough relative to the distance between the detector and the LED, so the LED should be regarded as a Extend the light source instead of the point light source. This is the so-called “near field situation”. At this time, the measurement does not obey the “inverse square law”. Moreover, when the LED is very close to the detector, the light intensity may vary as viewed from different positions on the detector. Not only that, the results of the measurement and the use of these measurement data are completely dependent on the environment at the time of measurement. Therefore, it is very important to measure the average luminous intensity of LEDs, which is to define an accurate measurement environment, which is suitable for most LEDs so that the data of different products can be compared with each other.

The average light intensity of the LED can be calculated by the following formula
ILED=Ed²
In the formula, E is the average illuminance measured by the detector, lm/m²; d is the distance, mo for environment A, d=0.316m; for environment B, d=0.100m.

Through integration, the total luminous flux φ can be obtained
φ=∫(A)EdA

(2) Integrating sphere method
Another simpler way to measure the total luminous flux of an LED is to use an integrating sphere to compare the LED under test with a standard LED with similar spatial and spectral distribution. If the LED to be tested does not match the standard LED, the spatial chromatic aberration correction coefficient can be calculated. Spatial chromatic aberration correction coefficients are usually more difficult to quantify, so different integrating spheres need to be estimated.