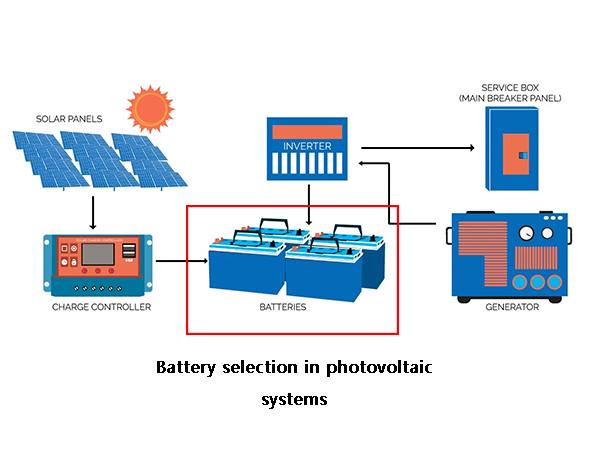 In photovoltaic systems, especially stand-alone photovoltaic systems, it is very important to choose a suitable battery. When choosing a battery, power, weight and quality are mainly considered, so the battery is required to be small in size, high in energy density, light in weight, durable and cost-effective. At present, the types of batteries used in photovoltaic lighting systems mainly include lead-acid batteries, brocade batteries, brocade metal hydride batteries, lithium ion batteries, and lithium polymer batteries. So far, no single battery has all the advantages mentioned above. Each battery has its own advantages, but at the same time, it has its limitations. Even batteries with the same electrochemical reaction system will have completely different performances due to structural design and process changes. According to the actual use environment, maintenance, price and application, combined with the characteristics of various batteries, the rational selection of batteries is very important to the reliability and safety of the photovoltaic system. The basic requirements of solar photovoltaic systems for batteries can be summarized as follows: low self-discharge rate; long service life; maintenance-free; high charging efficiency; wide temperature range; good deep discharge performance; high cost performance.

① Although the energy density of the battery is not too high (30~50W·h/kg), its power density is relatively high, currently reaching 200~300W/kg, and the newly designed product can reach 500W/kg. Such energy density and power density can be combined to meet the needs of various electrical equipment.
②The production process of the battery is mature and reliable, and the uniformity of the battery is good. Since batteries are mostly used in groups, the uniformity of each individual battery is the fundamental guarantee for the reliability and safety of the power supply.
③The battery has no memory effect, it can be charged or discharged at any time, which makes the maintenance work relatively simple, the durability is relatively good, and the service life is relatively long.
④ Its self-discharge rate can be said to be the lowest among all kinds of batteries, and it only loses about 5% of the battery power every month at high temperature.
⑤ The price is cheap, which is unmatched by any kind of battery. Especially as a large-scale power supply, its price and operating costs are often very critical factors for popularization and application.

Lead-acid batteries are relatively bulky, which is a well-known disadvantage. This makes its energy density lower than other commonly used batteries, but its high power density allows high current discharge, which can meet the needs of many electrical equipment, so that people naturally tolerate its bulkiness. Long-term storage in a discharged state is not good for lead-acid batteries, which will cause sulfation of the plates.
When the high current is overcharged for a long time or the float charging voltage is adjusted to a high level, the VRLA will experience thermal runaway, resulting in deformation of the battery slot and a rapid decrease in the discharge capacity. If a colloidal-sealed lead-acid battery is used, thermal runaway can be avoided due to its good internal thermal conductivity and lower float voltage.

Nickel-cadmium batteries have high charge-discharge cycles and are very durable; if used and maintained well, it can reach 1,000 charge-discharge cycles. It is worth noting that Jin-cadmium batteries must be fully discharged periodically. Otherwise, a large crystal of active material will be produced on the plate, which will lose its activity, and the power of the battery will drop rapidly, resulting in the so-called memory effect.

At present, nickel-cadmium batteries are mostly used in sealed instruments and equipment (such as programmers used in automatic control equipment, microcomputers, etc.), as well as power tools, toys and mobile phones. All of these take advantage of the advantages of Jin-cadmium battery with long storage life, many charging times and easy charging. It is less used in photovoltaic systems mainly because its self-discharge rate is too fast.

(3) Lithium-ion battery
Lithium metal is the lightest metal and has a very negative potential. A battery made of it as a negative electrode will inevitably have a high energy density. The positive and negative materials used in ion batteries are all interlayer compounds. They have space for lithium ions to enter and exit freely, and will not cause irreversible changes to the materials due to the insertion and extraction of lithium ions. When charging, the external input electric energy acts on the lithium ions, so that it migrates from the cathode material with lower energy to the interlayer of the anode material and becomes a high-energy state. During discharge, lithium ions naturally come out from the negative electrode material with higher energy and return to the positive electrode material layer with lower energy.

Although the ion battery has the above-mentioned unique advantages, it also has some problems to be solved. First of all, in order to ensure the safety of the battery during use, it is necessary to avoid metallic lithium, so the following measures must be taken during use:

Lithium-ion, nickel-metal hydride, and other battery technologies have made great strides in providing reliable energy storage solutions, and they have been exploratory in many settings. Fuel cells are an emerging and very attractive battery technology that is gradually finding its way into many applications, and there has been a lot of hype about them recently. The final application area for fuel cells is in automobiles, but in the interim, they have emerged in the backup power market. Key issues in using fuel cells as backup power sources as well as primary power sources are the start-up time and dynamic power response of these cells. Fuel cells, despite their excellent energy density, suffer from low dynamic power, so they require an enhanced technology for power assist and start-up. Also appearing in the same period are supercapacitors, which have very high power density and substantial energy density compared to electrolytic capacitors. In those applications that require high reliability but low energy requirements, supercapacitors can be used to replace batteries, or supercapacitors and batteries can be combined for applications with high energy requirements, so that smaller size can be used. , more economical batteries. Today, the best supercapacitors are ultra-high-power devices with power densities up to 20kW/kg, although the energy is still a fraction of that of batteries. Ultracapacitors are very compact in size (small ones are often the size of a postage stamp or smaller), but they can store much more energy than conventional capacitors and can discharge quickly or slowly. They have a very long service life and can be designed for the entire life cycle of the end product. When combined with the latest technology, supercapacitors, high-energy batteries and/or fuel cells can achieve high power characteristics and long operating life.

Although the energy density of the sealed lead-acid battery is not high, its power density is not low, and the coordination between the two is very good. From the perspective of battery performance and price, the valve-regulated sealed lead-acid battery (VRLA) in the lead-acid battery is especially suitable for the power system of solar photovoltaic.
The specific energy of nickel-cadmium and nickel/metal hydride batteries is higher than that of lead-acid batteries, but it is significantly reduced when discharged at high currents. Because of its high charge and discharge times, it is especially suitable for some electrical equipment that requires less power and is not expensive. Its memory effect and cost price limit its application range.

Li-ion and Li-polymer batteries have the highest energy density, but it drops significantly at high power output. Its complicated charging and discharging protection circuit also brings some troubles to use, and it is especially suitable for expensive mobile electrical equipment at present. After the battery cost is greatly reduced, it will become a strong competitor for power batteries.

In short, as far as the current development of batteries is concerned, the use of lead-acid batteries in solar photovoltaic systems is the best choice.