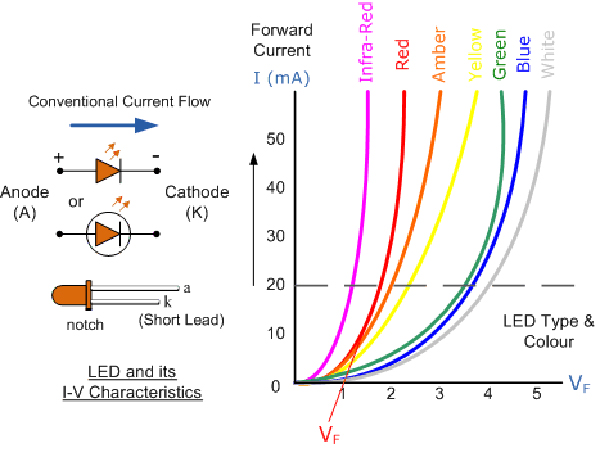 ①Voltage current characteristics of LED
The volt-ampere characteristics of LEDs are shown in Figure 1, which is roughly the same as that of ordinary semiconductor diodes. It can be approximated that the current I is proportional to the nth power of the voltage U. When the voltage U is small, the current I is mainly a leakage current, and the value is small. As the applied forward voltage increases and reaches the potential difference inside the PN junction, the forward current increases sharply. The LED drive circuit must take this feature into account. In the circuit, a resistor with an appropriate value must be connected in series to limit the current in order to place the PN junction burn. Under the driving power voltage, the size of the series resistance determines the size of the LED operating current.

② Features of LED working circuit
The LED can be driven by DC or AC; its brightness and lifetime are determined by the current through the LED chip. As the load of the drive circuit, LEDs are often combined in large numbers to form light-emitting components. The connection method determines the reliability and life of the LED.
Common LED connection methods mainly include: series connection, parallel connection, mixed series and parallel connection. Series connection (Figure 2) is to connect the positive and negative poles of multiple LEDs into a string at one time. The advantage of this connection method is that the working current of each LED is the same, and the uniformity of the light-emitting components can be maintained. However, once a certain LED is short-circuited, the current value on the entire loop will increase, which will adversely affect other LEDs on the same loop; if a certain LED is disconnected due to a fault, the LEDs on the entire loop will be extinguished. Parallel connection (Figure 3) is to connect the anode and anode, and the cathode and the cathode of multiple LEDs in parallel. When working, the voltage across each LED is the same. However, due to certain differences in characteristic parameters between devices, the current through different LEDs may be different. Before the heat dissipation is not good, the 1FD is prone to excessive current, which leads to its damage. Therefore, LEDs generally do not use direct parallel connection. If the LED is directly connected in parallel, the influence of various factors on the LED should be fully considered, and a suitable driving power supply and current limiting method should be adopted. Hybrid connection is to connect the LEDs in series and then in parallel (Figure 4) or in parallel and then in series (Figure 5) to form a light-emitting component. For a single group of series-connected LEDs, even if a certain LED is open or short-circuited due to various reasons, its adverse effects are largely limited to the series circuit, and the entire system is rarely affected. Therefore, the reliability of this connection method is the highest, and the requirements for the LED are relatively loose, and the brightness of the entire light-emitting assembly is relatively uniform. At present, this connection method is mostly adopted in a large number of lighting examples.

③ Dimming of LED
In a large working range, the light output of the LED is proportional to the working current, so the light can be dimmed by reducing the current. Moreover, since frequent switching of the LED will not have too much adverse effect on it, the dimming of the LED can also adopt the method of pulse width adjustment. By adjusting the duty cycle of the voltage and the operating frequency, the luminous intensity of the LED can be effectively adjusted . However, one thing to note is that when dimming, ensure that the operating frequency is high enough (a few hundred hertz), so that the human eye can look like the LED is always burning, otherwise it will see rapid flicker, causing visual discomfort.
Dimming may affect the light color of the LED output light. This is because changing the current of the LED will change the temperature of the PN junction of the LED, thereby causing a change in the power distribution of the emission spectrum, that is, a change in color. Generally, the color change of the red and yellow AIGalnP series of LEDs is much larger than that of the blue and green LEDs of the InGaN series, but the change of the light color of the LED is not as obvious as that of the incandescent lamp dimming. Dimming can cause difficulties in an array that uses multiple color LEDs to mix light into white. This is because when dimming, the amount of change in the output light of the LED chips of various colors may be inconsistent, and thus cannot be mixed into white light.
Dimming will not adversely affect the life of the LED. In traditional light sources, such as the dimming of fluorescent lamps, the reliability and life of the light source will be reduced. But this does not happen in LEDs. This is because the life and light attenuation of the LED are largely determined by the temperature of the PN junction, and the increase in temperature will reduce the life of the LED. Since the dimming of the LED, whether it is adjusting the current or adjusting the pulse amplitude, will cause the PN junction temperature of the LED to decrease, so dimming is not harmful to the life of the LED, and may even increase the life of the LED.