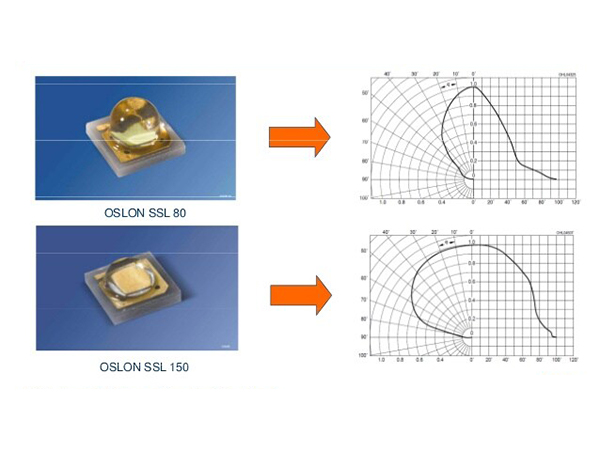 1). Primary optical design
Primary optical design is mainly divided into three methods: refraction, reflection and catadioptric.
(1) Refraction
The refraction of the interface of the refraction type LED housing packaging material to the light emitted by the chip is shown in Figure 3.24. The main object of refracting LED design is the shape of the refracting surface. The condensing surface can be spherical or aspheric. The solid angle contained by the concentrating surface is limited, the maximum is about 2.1Sr. Most of the light (about 70% to 80%) leaks from the side of the packaging material, so the condensing efficiency is low . Adding a reflector cup to the chip can improve the light-gathering efficiency of the LED to a certain extent. However, the reflector cup increases the size of the light-emitting surface and increases the divergence angle of the light. If a narrow beam is required, which is almost parallel, the size of the LED package must be increased, which is equivalent to lengthening the focal length. Adding a reflector can not fundamentally solve the problem of low condensing efficiency.

(3) Catadioptric
If the front side of the LED chip emits strong light, or in order to reduce the longitudinal size, a catadioptric structure can be used, that is, on the basis of the forward reflection, a refracting surface is added to play the role of concentrating light. The difference from the existing LED is that the light leaked from the side is reflected forward, which increases the light collection efficiency.

2). Secondary optical design
At present, the secondary optical design is mainly divided into several ways: scattering, concentrating and mixing the two. In some special occasions, such as road lighting, automobile lighting, etc., the light distribution curve of the lamp needs to meet special requirements; at this time, the secondary optical design of the LED also needs special consideration.
(1) Scattering type
For concentrating LEDs, to achieve large-area illumination or display, it needs to be realized by adding a diffuser. The principle of the diffuser is the same as the trapezoidal or cylindrical refracting plate. Figure 3.26 (a) shows the cylindrical refracting plate plan, which mainly expands the beam angle in one direction while making the illumination uniform. When used as a signal light, the light-emitting surface can be displayed uniformly. Figure 3.26(b) shows that the beam angle is also expanded in one direction, but its light intensity distribution is different from Figure 3(a). The two scattering plates in the picture are one-dimensional scattering. If two directions are required for scattering, the scattering plates in two directions are used, or they are combined on one plate, or two plates are combined.

(2) Concentrating type
In some applications, the light-gathering ability of the LED of the primary optical design is limited, and additional lenses or lens arrays are needed to further condense the light to achieve the purpose of increasing the light intensity. As shown in Figure 3.27, it is a condensing secondary optical design. The use of narrow-beam LEDs can increase the luminous intensity to a certain extent, but the condensing efficiency will be reduced, and the uniformity of the condensing spot is poor. Using a condensing lens is better than simply using a narrow-beam LED.