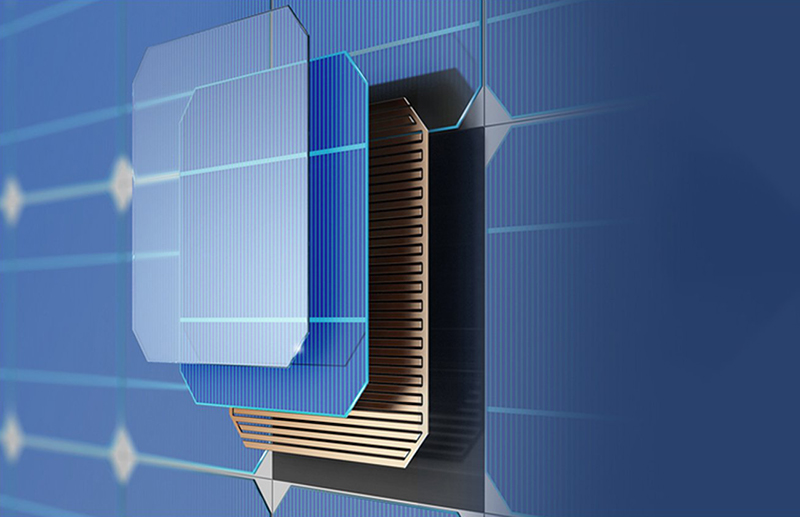 The main technical obstacles restricting the further improvement of the photoelectric conversion efficiency of crystalline silicon solar cells are:
①The effect of shading by grid lines on the surface of the battery;
②Light reflection loss on the surface of the battery;
③Light transmission loss;
④ Internal compound loss;
⑤ Surface compound loss, etc.

The highest conversion efficiency can be obtained when the short-circuit current, open-circuit voltage and fill factor of the solar cell all reach the maximum value. But because they influence and restrict each other, and are affected by the inherent quality of the material, it is very difficult to improve the three at the same time. Under normal circumstances, only one of them can be improved alone. To increase the short-circuit current, efforts can be made from two aspects: light absorption and spectral response. In the solar spectrum, the energy of short-wave light is very large, while the short-wave response of conventional silicon cells is very poor. In order to broaden the peak area of ​​the battery’s spectral response, a purple cell with the characteristics of shallow junction, dense grid and thin “dead layer” has been developed. Although there is an anti-reflection film on the surface of conventional silicon cells, a single-layer anti-reflection film is still selective to wavelength. The non-reflective battery, that is, the suede battery, can absorb incident light multiple times due to its uneven surface and has no wavelength selectivity. Therefore, the absorption of light energy in a wider wavelength range increases, which further improves the short circuit. Current. Increasing the open circuit voltage of the battery can improve the conversion efficiency of the battery, while the open circuit voltage, short-circuit current and fill factor of the battery with a back field can be improved. These new processes and technologies have been applied in high-efficiency batteries and have achieved good results. The current goal is not only to research and develop new processes, new technologies and new device structures, but also to research and develop the problem of transferring to industrial production and reducing the cost of batteries and components.

(1) Emitter passivation and partial diffusion solar cell on the back (PERL)
Both sides of the battery are oxygen passivated, and the silicon oxide layer on the surface of the battery is made into an inverted pyramid by photolithography, as shown in Figure 1. The metal contact surfaces on both sides are reduced, and the contact points are heavily doped with boron and phosphorus. The efficiency of monocrystalline silicon cells prepared by this method has reached 24.7%, and the efficiency of polycrystalline silicon cells has reached 19.8%.

(2) Buried grid solar cell (BCSC)
Use laser grooving or mechanical grooving. The laser engraves a groove with a width of about 20 μm on the surface of the silicon wafer, and then electroless copper plating to form electrical electrodes, as shown in Figure 2. Its main features are:
①Random suede, reducing surface reflectivity;
②Selective emitter to obtain the best spectral response and the smallest touch resistance;
③Laser grooved buried gate electrode (LGBG) achieves the minimum shading rate,
Copper electrode with high conductivity. The mass production efficiency of this battery has reached 17%, so it has the significance of industrial production.

(3) High-efficiency back surface reflector solar cell (BSR)
In this type of battery, a vacuum evaporation method is used to deposit a layer of high-reflectivity metal surface between the back and back contacts of the solar battery. For silicon batteries, the wavelength of light that can be absorbed by the battery and converted into electrical energy is approximately 1150nm, any radiation waves longer than it can easily penetrate the semiconductor material and enter the back surface reflector (referred to as the back reflector). The thinner the thickness of the battery, the more obvious the effect of the back reflector. The so-called back reflector is to make the back of the battery into a reflective surface, which can reflect the light that passes through the battery base and reaches the back surface, thereby increasing the light utilization rate (as shown in Figure 3). In this way, the absorption of long-wave light by the battery can be increased and the short-circuit current can be increased. And it can also reflect the red light that reaches the backside with a wavelength greater than the cut-off wavelength of the battery’s spectral response, thereby reducing the battery’s absorption coefficient. This reduces its harmful effects, because this part of the light not only can not produce photo-generated carriers, but also produces a thermal effect, which increases the temperature of the battery and leads to a decrease in efficiency.

(4) High-efficiency back surface field and back surface reflector solar cells (BSFR)
It is also called drift field solar cell. This battery is a P+ layer based on the BSR battery structure. This field facilitates the separation of photogenerated electron-hole pairs and the collection of minority carriers. However, this P+ field is easily attenuated by the radiation of high-energy particles in space, and is less resistant to damage from high-energy particles than the BSR battery. Its current highest efficiency is 14.8%.

(5) High-efficiency and low-resistance silicon solar cells (RESC)
It is a battery made of P-type zone fused silicon with resistivity of 0.2Ω·cm and 0.3Ω·cm. Its characteristic is to prepare a passivation layer in the emission area of ​​the battery. The battery with this structure reduces the surface density and inhibits the surface recombination speed. The diffusion junction is relatively deep, about 0.7μm, while maintaining a high short-circuit current density of 39.2mA/cm2, it has a relatively high open circuit voltage of 670mV and a high fill factor (82.1%). The battery is tested under the conditions of AM1.5, 100mW/cm2, 25°C±2°C, and its conversion efficiency can reach 21.6%.