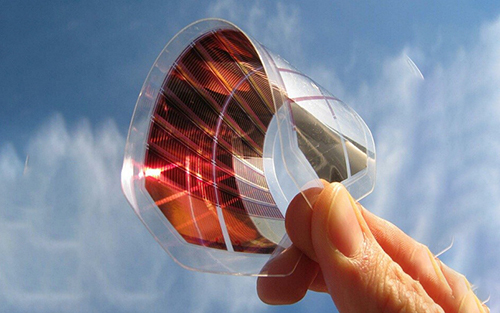 Thin-film solar cells are composed of semiconductor films deposited on glass, stainless steel, plastic, ceramic substrates or thin films with a thickness of several micrometers or tens of micrometers. Because of its thin semiconductor layer, it can greatly save battery materials and reduce production costs. Therefore, it is the most promising new type of solar cell and has become a key project and hot topic of photovoltaic technology research and development in the world today. The following is a brief introduction to the research and development of several major thin-film solar cells.

④ Dye-sensitized solar cell (DSSC)
Dye sensitized solar cell (DSSC) (see Figure 3) has the advantages of low material cost and simple manufacturing process due to its simple structure, and can also be mass-produced on a large area by printing. Because it uses organic dyes, DSSC has another name for organic dye solar cells. The structure of the dye-sensitized solar cell is composed of two glass substrates, two transparent conductive films and electrodes. The biggest difference from other thin-film solar cells is that the liquid electrolyte is used in the middle, and the photocatalyst and dye are added. The electrode material The electrolyte is mainly platinum, and the electrolyte is mainly iodide ions (I3/I-). In addition, nano-titanium dioxide (TiO2) is used as a photocatalyst, and dyes are used to absorb sunlight to achieve solar power generation. At present, in order to increase practicability, it has begun to develop flexible substrates to replace glass substrates, and colloidal electrolytes or even solid electrolytes to replace liquid electrolytes. Dye-sensitized solar cells can be produced on a roll-to-roll scale. It can greatly reduce the cost, it is also very easy to realize the integration with the building, and it can work under low light conditions, which is a focus of the current research on membrane solar cells.