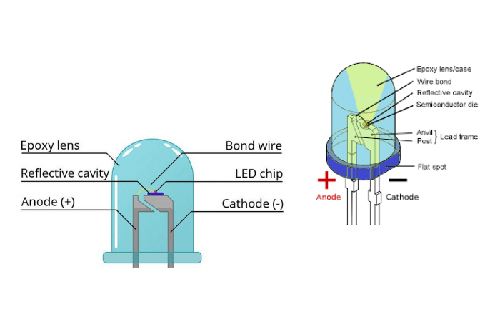 Structural characteristics of LED light-emitting devices
The basic structure of the traditional LED is shown in Figure 1. The LED chip is fixed on a conductive and thermally conductive metal bracket with two wires. The lead with the reflective cup (or reflective bowl) is the cathode, and the other lead is the anode. The periphery of the chip is encapsulated with epoxy resin material, which can protect the chip on the one hand, and play a role of concentrating light on the other hand. The LED chip is the core of the LED device. As shown in Figure 2, the two ends of the chip are metal electrodes; the bottom is the substrate material; the middle is a PN junction composed of a P-type semiconductor and an N-type semiconductor; the light-emitting layer is located between the P-type layer and the N-type layer. The P-type layer, the N-type layer and the light-emitting layer are made on the substrate material by a special epitaxial growth process. When the chip is working, the P-type layer and the N-type layer respectively provide holes and electrons required for light emission, and they are injected into the light-emitting layer to recombine to generate light. The structure of the LED chip shown in Figure 2 is simplified and abstracted. The actual LED chip has a different structure depending on the manufacturing process.

After the LED is made into a large-scale device and package, the light output of the LED has been greatly improved, and it has reached the level of lighting use in some occasions. In addition, after the LED adopts large-size semiconductor components, the structure of the LED has also been changed to make its luminous efficiency higher. As shown in Figure 3, Figure 3(a) is an early design, the substrate absorbs part of the light, Figure 3(b) is an improvement to the light transmission performance of the LED substrate, and the original light absorption effect is no longer used The base layer of the transparent material is used as the base layer, which improves the light transmittance. Figure 3(c) optimizes the shape of the base layer to allow as much light as possible to pass through the device.

The substrate material of the LED has a great influence on the performance of the wafer. In order to ensure the performance of the wafer, it is required that the quality constant and thermal expansion coefficient of the substrate material match well with the film grown on the wafer. In addition, in order to improve the price competitiveness of the product, it is necessary to improve the price competitiveness of the product. From the perspective of cost, it is also required to be able to produce substrate materials in large sizes and in batches. At present, there is no way for GaN substrates to meet the requirements of large-scale and mass production, so the main substrate materials currently used are sapphire and silicon carbide.

Silicon (Si-111) substrate is the current research hotspot. The advantages of silicon substrate are good heat dissipation, low cost, and suitable for large-area growth. In addition, semiconductor electronic components also use silicon materials to facilitate the integration of circuits and LEDs. Since silicon itself is a conductive material, electrodes can be arranged on both sides of the wafer, reducing the size of the wafer. Although the silicon substrate has an advantage in price, it has a 17% mismatch with the GaN lattice constant and a 54% difference in thermal expansion coefficient, which makes the silicon substrate prone to cracks and defects during growth and room temperature. In addition, the reaction between silicon and gallium is prone to cause defects on the interface between GaN and silicon substrate. Therefore, it is necessary to add a buffer layer between the GaN layer and the silicon substrate. At present, the main buffer material is AIN to relieve heat dissipation and reaction. The problem. Bridgelux uses its unique buffer layer technology to produce crack-free wafers at room temperature, which greatly improves the competitiveness of silicon substrates. Silicon substrate materials are the main development direction in the future.

The structure of the LED will vary greatly due to the different materials used. The most important thing in the design of the LED structure is how to set the light-emitting PN junction layer. In actual situations, the light-emitting layer is never set on the bulk-grown base material. In the medium, because the bulk-grown matrix material has relatively more defects, large series resistance and inappropriate energy band for light emission, the luminous efficiency is low. Therefore, the method of growing a single crystal again on the bulk-grown base material is usually chosen to realize the light-emitting layer, and the grown single crystal layer matches the lattice constant of the base material. This growth process is called epitaxial growth. Usually epitaxial wafers have homojunction and heterojunction structures.

GASP, AIGaAs, SiC, etc. are used as materials for mainstream LEDs, and considerable achievements have been made. At present, as LEDs enter the field of lighting, higher power and luminous efficiency are required, and the third-generation semiconductor materials represented by GaN have begun to be applied. GaN material has a direct transition energy band structure, large forbidden band width, high electron mobility (twice that of SiC), no microtube defects, high breakdown electric field and many other excellent properties. However, due to the lack of suitable single crystal substrate materials for GaN materials (the lattice mismatch between the sapphire substrate and GaN is as high as 14%), the dislocation density is too large (approximately 107 times that of the ZnS material), and the N-type background concentration is too high. Problems such as high (>1018/cm3) and the inability to achieve P-type doping were once considered to be hopeless to be applied to LEDs. After entering the 1990s, with the continuous development and improvement of material growth and device technology levels , The development of GaN-based devices is very rapid, and has now become a very dazzling new star among wide band gap semiconductor materials.

As mentioned above, in order to improve the efficiency, the heterojunction structure is adopted. The GaN-based double heterojunction blue LED structure developed by Nichia in 1994 is to grow a very thin GaN buffer layer on a sapphire substrate to create A high-quality surface is used for epitaxial growth. The core part is divided into five layers. The two outermost layers are the main body of the PN junction composed of the P-type GaN layer and the N-type GaN layer. On the side is the AIGaN barrier layer. Using such a double heterojunction structure can confine the recombination of electrons and holes in the light-emitting layer. Zn serves as the radiation recombination center, and the electrons and holes injected by the double heterojunction recombine light through the Zn energy level. Since the materials of each semiconductor layer are different, the band gap is high, and the refractive index difference between layers is large, the radiated light is very strong, and the FWHM of the radiation spectrum is small, and it is easy to obtain purer monochromatic light. Subsequent research found that the use of a quantum well structure can further limit the energy band distribution of carriers. A GaN-based LED with a single quantum well structure developed by Nichia is inserted into an InGaN film (thickness and De Broglie wavelength division order of magnitude) , So that the carriers in the well layer are subject to one-dimensional restriction, band splitting occurs, and the recombination process of electrons and holes is well confined in the active layer, so the luminous brightness is greatly enhanced.

The manufacturing cost of GaN is very high, and the lack of a suitable, large-area substrate is a serious obstacle restricting the development of GaN devices. At present, sapphire is used as the most common substrate material in actual manufacturing. However, sapphire is an insulator, and the device requires a horizontal design, which is limited by the breakdown voltage compared with a vertical device, and the volume of the obtained high power density device is also very large. In addition, the high lattice mismatch rate between sapphire and GaN (33% when the lattice parameters have no epitaxial relationship, 16% when there is an epitaxial relationship) has also been improved by the growth of a buffer layer.

It is difficult to activate P-type GaN. It is usually difficult to obtain a high concentration of holes by doping GaN with acceptor atoms. The more commonly used dopant is magnesium. Magnesium-doped GaN can form a PN junction under the activation of electron beam exposure. However, the resistivity of GaN doped with magnesium is very high, and the excitation energy level of magnesium is deep (Ea=200meV). P-type impurities cannot be completely ionized at T=300K. Therefore, in order to obtain a higher concentration of holes, doping is required. A large amount of magnesium is mixed, but the excessive magnesium will cause the automatic compensation effect, and the material will gain insulation. Due to the deep excitation energy level of magnesium, when T=300K, the ionization rate of magnesium is only a few percent, and the hole mobility [μp=10cm3/(v/s)] is lower than the electron mobility [μN=200cm3 /(V/s)], so if a standard PN junction is used, the main place where recombination occurs is in the P-type area.

The current commercial GaN-based LEDs are all manufactured on a sapphire substrate or a SiC substrate. However, due to high hardness, poor electrical conductivity and thermal conductivity, sapphire brings a lot of inconvenience to the processing and application of later devices. SiC also has the disadvantages of high hardness and high cost. In order to reduce the production cost of LEDs and improve competitiveness, relatively inexpensive Si substrates have begun to gain attention. Because Si substrates have excellent thermal conductivity, electrical conductivity, and mature device processing technology, the Si substrate GaN-based LED manufacturing Technology research is gradually being carried out.