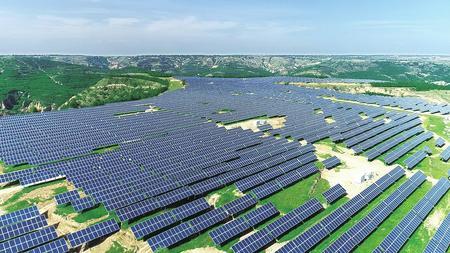 Introduction to photovoltaic power generation
Scientists have been studying photovoltaic power generation for two centuries. In 1839, French scientist AE Becquerel (AE Becquerel) discovered that light can make a voltaic cell with two pieces of metal immersed in the electrolyte to generate additional potential. This phenomenon was later called the “photovoltaic effect” (photovoltaic effect). effect)”, referred to as “photovoltaic effect”. In 1873, British scientist W.B. Smith discovered selenium materials that are sensitive to light, and reasoned that the power of selenium under light is proportional to the intensity of light. In 1880 Charles Fritts developed a photovoltaic cell using selenium as the material. Among all the devices that can produce photovoltaic effect, the semiconductor PN junction is the device with the highest photoelectric conversion efficiency so far, so solar cells mainly adopt this structure.
Early solar cells had low photoelectric conversion efficiency and high production costs, which hindered the use of solar cells. Scientists have been committed to the research of solar cells to improve photoelectric conversion efficiency and reduce production costs. In the 1950s, when scientists at Bell Labs in the United States were looking for power for remote communication, they found that structurally doped silicon semiconductors are more sensitive to light than selenium and can generate a stable voltage. In 1954, Bell Laboratories in the United States made a practical monocrystalline silicon solar cell for the first time, with a photoelectric conversion efficiency of 6%. So far, a practical photovoltaic power generation technology that converts solar energy into electrical energy has been produced.
In the 1970s, research on solar cells was extensively carried out. Monocrystalline silicon solar cells used in various space vehicles came out. Scientists also developed ultra-thin monocrystalline silicon solar cells, but the main problem at this time was cost. Higher.
After the 1970s, with the development of modern industry, the global energy crisis and air pollution problems have become increasingly prominent. Due to the unique advantages of solar energy, research on solar cells has been carried out on an unprecedented scale. After the 1980s, the types of solar cells continued to increase, the scope of application became wider, and the market scale gradually expanded. More importantly, the cost of producing solar power has decreased exponentially, which provides conditions for the popularization of solar cells.
With the continuous progress of science and technology in the 21st century and the attention of mankind to the use of solar energy, the performance of solar cells will be continuously improved, the production cost will be continuously reduced, and they will be popularized in daily life shields.

China’s photovoltaic cell technology and quality rank among the top in the world. It has mastered the technology for the large-scale production of thousands of tons of polycrystalline silicon, the comprehensive utilization of silicon material production by-products has improved significantly, and the energy consumption indicators of advanced enterprises are close to the international advanced level. China can produce 50% of the photovoltaic cell production equipment, including single crystal furnaces, polycrystalline silicon ingot furnaces, square machines, and multi-wire cutting machines. Although China’s solar cell application field started late, China’s solar cell industry has developed rapidly, and its output in 2013 has ranked first in the world. China’s solar cell manufacturing industry already has the advantage of scale, accounting for 62% of global production. The solar cell industry is in a period of rapid growth. Improving the industrial chain and enhancing technological independent innovation capabilities will be the hottest development of China’s solar photovoltaic industry in the next few years. Driven by favorable factors such as the continuous decline of photovoltaic power generation and the rapid development of the photovoltaic power generation application market, the photovoltaic market is expanding steadily. The demand for solar cells in China continues to increase; the rise of the photovoltaic industry in Asia and other regions has also enabled the continuous development of the solar cell industry.
With the development of science and technology, the cost of photovoltaic power generation will continue to decrease in the future. Various related technologies such as crystalline silicon, thin film and other solar cells will gradually improve performance, and the conversion efficiency of modules will be further improved. If the energy conversion rate of photovoltaic modules reaches 30%~50%, solar radiation can be used efficiently, and the cost of installation and design will be further reduced, which is conducive to the popularization of solar energy. Although traditional energy will still be the main energy source in the next few decades, the proportion of renewable energy used will continue to increase and play an important role. Because of the cost-saving advantages of photovoltaic power generation, solar energy will become the first choice.