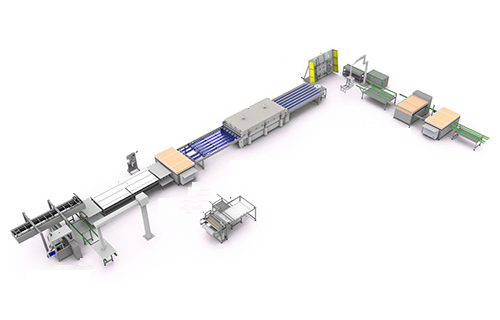 ①Crack
Cracking is a kind of undesirable phenomenon of solar cell modules, which refers to the phenomenon that the cells in the module have minute cracks that cannot be noticed by the naked eye after being packaged. The cell chip will expand under mechanical load, which may cause open circuit damage. If the crack is more serious, the thermal shift effect may occur, which will increase the temperature of the cracked cell area, accelerate the aging of the module packaging material, affect the current output of the entire module, reduce the output power, and ultimately accelerate the power attenuation of the module. , Reduce its normal service life. The process flow of component production: cell sorting-single soldering-string soldering-lamination-(EL test)-lamination-(E test)-clear assembly-component test-(EL test)-packaging. For example, in a power test configured with a 285W component, it is found that the power of the component number A is 275.141W, and the power of the component number B is 282.431W, and EL imaging and infrared imaging are performed. From the EL photo of module A, it is found that there are serious cracks in the cells in the module, as shown in Figure 1. No serious cracks were found in the EL image of component B, as shown in Figure 2. The crack of the cell will cause the loss of the power of the module, and the magnitude of the loss has a linear relationship with the number of cracks. The more hidden cracks, the greater the power loss, so reducing the generation of hidden cracks during the production process has a great effect on the improvement of module power.

②Laminating process
The lamination process is mainly designed for the characteristics of the transparent colloid used to encapsulate the photovoltaic modules. Its main purpose is to achieve the optimal degree of curing of the EVA, and prevent the displacement and the generation of bubbles, so that the materials of each layer can be tightly pressed. Together. The stretchable silicone plate separates the shell of the laminator to form an upper chamber and a lower chamber. There is a heating device inside the laminating disk, and the heat is transferred to the components through the laminating disk. The function of the laminator is to heat and press the EVA under vacuum conditions to realize the curing of the EVA and achieve the purpose of sealing the Dayang battery. In order to prevent the occurrence of hidden cracks, the lamination process is changed to segmented lamination, which reduces the strength of the components and improves the pass rate of the components. Need to optimize the lamination temperature, vacuum time, pressure size and lamination time. The pressure cannot be too strong, otherwise it will cause the battery to be crushed; and too little pressure has little effect on the tightness of the EVA after curing, and it cannot remove the remaining air bubbles. The adhesion between EVA and backplane, EVA and glass Less force. Adjusting the timing of pressurization can avoid the impact of sudden pressure changes on the battery, and the pressure is released step by step, and the proportion of solar cell cracks can be greatly reduced.

③Welding
With the continuous thinning of silicon wafer thickness and the continuous increase of battery area, battery fragments or cracks caused by the welding process are the main factors affecting the reliability of the components. In the soldering process, in addition to the quality factors of the cell itself, the main factors that affect the soldering effect are: soldering temperature, the selection of flux, the selection of ribbon and solder, the operating specifications of the operator, etc., a certain amount of flux and solder Corresponds to the optimal welding temperature. During the soldering process, due to the high temperature of the soldering iron, a certain temperature difference is formed on the battery, which has a thermal shock. If the welding temperature is low, on the one hand, the oxide layer on the welding surface is not easy to remove, forming a virtual weld; the high welding temperature will cause the cell to be deformed due to thermal stress, resulting in cracks and fragments. In the welding process of crystalline silicon solar cells, the use of flux affects the quality of welding and directly affects the effect of the subsequent lamination process. During the entire soldering process, the flux mainly plays the following functions: The flux acts at high temperature through its own active material to remove the oxide layer on the surface of the soldering material, and at the same time reduce the surface tension between the tin liquid and the soldered material. It is small to enhance the performance of liquid tin flow and wetting; at the same time, the flux itself moves in the base to transfer heat to the base, and sometimes it can also protect the material to be welded from oxidation before the welding is completed. The most important thing in welding is to remove oxides and reduce the surface tension of the welding. If the flux cannot effectively reduce the surface tension, cracks will appear.

④Transportation
Through the statistics of cracks, it is found that handling and shaking should be avoided during the production process to reduce the deformation caused by the weight of the glass, which has a vital impact on reducing the cracks of the components. When manually transporting the laminated components to the cooling table, the middle part of the components bends downward under the action of gravity. In the process of horizontal transportation, the amplitude of the up and down jitter of the module is larger, and the larger the size of the module, the more severe the bending degree. In this case, the battery sheet located in the middle of the module has a severe bending amplitude, which is easy to cause cracks.

At present, the materials of solar cell modules need to be continuously researched and developed to improve their performance, and more cost-effective materials need to be developed to meet the gradual reduction in module sales prices. In the production process, how to control the occurrence of cracks is also a major process improvement project that component manufacturers need to continue to study and implement.