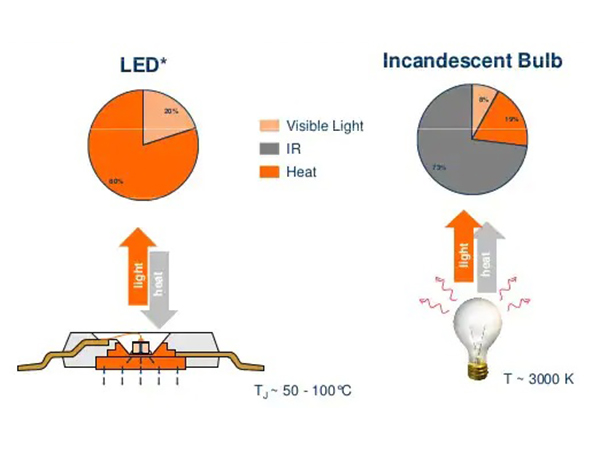 ①Causes of heating of LED devices
Like traditional light sources, LEDs also generate heat when they work. Under the action of an external electric field, the electrons in the N-type semiconductor gain energy to overcome the potential barrier at the PN junction and recombine a large number of holes in the P-type semiconductor. After recombination, the electron returns to a low-potential energy state and releases energy at the same time. The form of energy release may be in the form of radiation, or it may be in the form of non-radiation. If the energy is released in the form of non-radiation, it will cause the vibration of the semiconductor crystal lattice, that is, it will be converted into heat. In addition, electrons encounter resistance when they migrate in the semiconductor, which is another source of heat.

The most commonly used heat dissipation method for high-power LEDs is the flip chip structure. The structure of the traditional LED determines that most of the heat of the chip is dissipated through the metal pins, and cannot be dissipated through the substrate with poor thermal conductivity. After adopting the flip chip structure, the heat can be dissipated through the heat sink located at the bottom of the L and ED. Figure 3 shows the internal structure of the flip-chip LED. The LED chip is soldered on the insulating heat sink on the surface, and the electrical connection with the lead frame is completed by gold wire bonding. The heat sink is encapsulated with plastic material, and the outside of the chip is sealed with a thermally stable, insulating and optically transparent resin material, and then the entire LED device is attached to the substrate, and then an external heat sink is used to improve the heat dissipation effect. A small part of the heat energy of this structure is directly dissipated to the surrounding environment through the sealing material, and most of the heat is dissipated to the surrounding environment through the light-emitting layer (heat generation) → substrate → chip bonding layer → substrate → heat dissipation fins. The packaging material has a great influence on the heat dissipation effect. Therefore, looking for packaging materials with excellent thermal conductivity and optimizing the thermal system of the device from the material aspect is an important way to improve the heat dissipation efficiency.