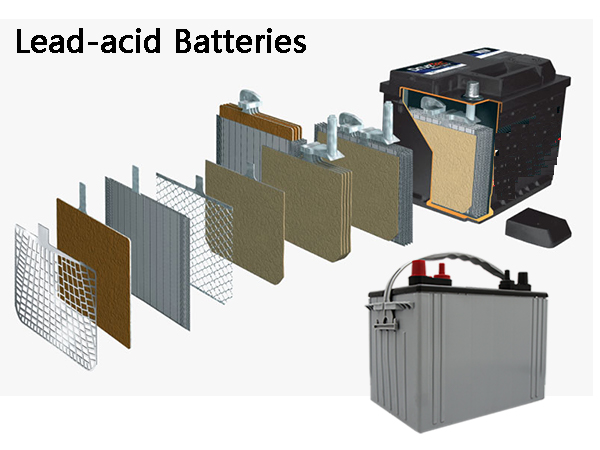 1. The development of lead-acid batteries
The lead-acid battery was invented by Plante in 1859 and has a history of more than 100 years. Since its invention, lead-acid batteries have always had an absolute advantage in chemical power sources. This is because of its low price, easy availability of raw materials, sufficient reliability in use, suitable for high current discharge and a wide range of ambient temperature and other advantages.

By the early 20th century, lead-acid batteries had undergone many major improvements, improving performance such as energy density, cycle life, and high-rate discharge. However, open-type lead-acid batteries have two main disadvantages: 1. At the end of charging, water will be decomposed into hydrogen and oxygen gas, which requires frequent addition of acid and water, and maintenance work is heavy; Pollute the environment and limit the application of batteries. In order to solve the above two problems, it is hoped to realize the sealing of the battery and obtain clean green energy.

Thomas Edison published a patent in 1912, proposing to use platinum wire in the upper space of the single cell. When there is current passing through, platinum is heated and becomes a catalyst for hydrogen and oxygen combination, so that the precipitated H2 and O2 are recombined and returned to the electrolyte. .

In 1975, Gates Rutter obtained a patent for the invention of a D-type sealed lead-acid dry battery after many years of hard work and high cost, which became the prototype of today’s VRLA (valve-regulated sealed lead-acid battery). In 1979, GNB Company invented the MFX positive grid patent alloy after purchasing the patent of Gates Company, and began to publicize and produce large-capacity liquid-absorbing sealed maintenance-free lead-acid batteries on a large scale.

Therefore, the chemical reaction in the equilibrium state of the cell can be expressed as:
PbO2+2H2SO4–+Pb⇌PbSO4+2H2O+PbSO4

When the battery is in the open circuit state, the electrons released by Pb on the negative electrode become Pb2+ ions, which react in the electrolyte to generate PbSO4. At the same time, the Pb2+ ions in the generated PbSO4 will adsorb electrons on the surface of the electrode, and the reaction rates of the two are equal. PbO2 on the positive electrode absorbs electrons and reacts with the electrolyte to generate PbSO4 and H2O. At the same time, PbSO4 has the tendency to release electrons and oxidize into PbO2 and HSO4– ions. The reaction rates of the two are also equal, so they are balanced inside the battery. When the battery undergoes a discharge or charge reaction, current will flow through the battery, the electrodes will be out of balance and energy conversion will occur.

(1) Discharge of lead-acid batteries
When the lead-acid battery is not connected to the load, the electrode potential of the positive and negative poles forms an electromotive force inside the battery and is in a balanced state. A load is connected to both ends of the battery. Under the action of electromotive force, electrons continuously flow out from the negative electrode, and flow back to the positive electrode after passing through the load to form a current. Inside the battery, the electrolyte undergoes a dissociation reaction:
H2SO4→H++HSO4–

At the same time, a reduction reaction occurs on the positive electrode of the battery:
PbO2+HSO4-+3H++2e→PbSO4+2H2O

Due to the reduction reaction on the positive electrode, the electrode potential of the positive plate gradually decreases, while the oxidation reaction on the negative plate promotes the increase of the electrode potential. The whole process will cause the battery electromotive force to drop. In the oxidation-reduction reaction, the active materials Pb and PbO2 on the positive and negative plates are constantly transformed into PbSO4, which are deposited on the surface of the plates respectively. At the same time, the electrolyte solution H2SO4 gradually turns into water, causing the density of the electrolyte solution to decrease and the capacity of the battery to decrease. Therefore, the discharge process is a process in which the load consumes electrical energy, and the active material and electrolyte are continuously lost to generate PbSO4.

(2) Charging process
The charging process of the battery is the reverse process of discharging, and an external power supply is required to input energy. Under the action of an external power supply, the transport of current is realized by the migration of positive and negative ions to the two poles, and a chemical reaction occurs at the interface of the electrode solution. This process is electrolysis. During electrolysis, under the action of charging and current, the water molecules in the electrolyte will undergo electrolysis.
H2O→H++OH–

Also occurs in the electrolyte
H++HSO4–→H2SO4

3. Current law during charging and discharging
Knowing the charging current of the battery, the amount of charge Q stored in the battery after the charging time t can be obtained by integrating from time 0 to time t:
Q=∫t0idt=∫t0I0e-otdt=I0/α(1-eot)

In the formula, I0 is the initial charging current; α is the current acceptance ratio. Charge amount at the end of charging
Q=I0/α

Therefore, for any given battery power, the higher the current acceptance ratio α, the greater the initial current and the faster the charging speed. If the charging current always changes according to an acceptable value, then the value of α can remain unchanged, and the charging will always be in the best state that its actual accepted charging current matches its inherent characteristics.

However, the charging process of lead-acid batteries is governed and influenced by three basic laws.

These three basic laws lay an important theoretical foundation for the charging and discharging of lead-acid batteries, characterize the internal relationship between the acceptable charging current and the discharge capacity of the battery, and point out that a certain depth of discharge on the battery during the charging process is the best way to improve charging. The current acceptance ratio is an effective way to speed up the charging process.

It can be seen from Figure 1 that the initial charging current is very large, but the decay is very fast, and the time to maintain high current charging is not long. It is difficult to directly use this curve to charge. In order to quickly charge the battery, can the initial charging current be maintained as long as possible to shorten the total charging time? The main reason is that the polarization phenomenon occurs during the charging process, which affects the charging speed and charging current of the battery. During the charging process of the sealed battery, oxygen and hydrogen are generated inside. When the oxygen cannot be absorbed in time, it accumulates on the positive plate (the positive plate produces oxygen), which increases the internal pressure of the battery, increases the battery temperature, and reduces the positive plate at the same time. The area of ​​​​is manifested as an increase in internal resistance, and the so-called polarization phenomenon occurs.

The charging process and the discharging process are inverse reactions to each other. The reversible process is a thermodynamic equilibrium process. In order to ensure that the battery can always be charged in a balanced state, the current through the battery must be as small as possible. The ideal condition is that the applied voltage is equal to the electromotive force of the battery itself. However, practice has shown that when the battery is charged, the applied voltage must be increased to a certain value, and this value exceeds the equilibrium electromotive force value of the battery to varying degrees due to the differences in various factors such as electrode materials and solution concentration. In a chemical reaction, the phenomenon that the electromotive force exceeds the thermodynamic equilibrium value is the phenomenon of polarization. There are three main reasons for the polarization phenomenon.

(1) Ohmic polarization
During the charging process, positive and negative ions migrate to the poles. In the process of ion migration, it is inevitably subjected to a certain resistance, which is called ohmic internal resistance. In order to overcome this internal resistance, an additional voltage must be applied to overcome the resistance to promote ion migration. This voltage is thermally transferred to the environment, so-called ohmic polarization occurs. With the sharp increase of the charging current, the ohmic polarization will cause the high temperature of the battery during charging.