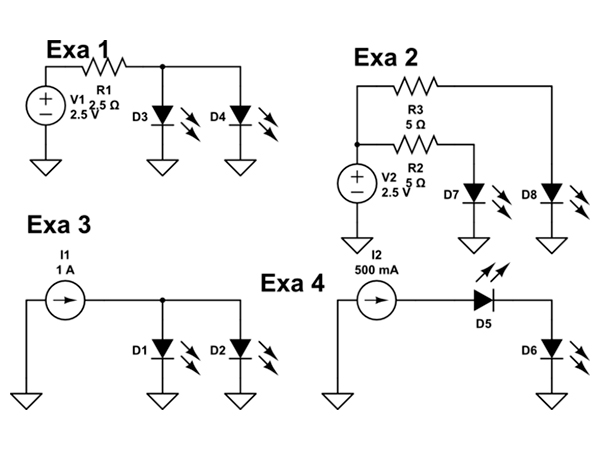 The current mainstream lighting LED lamps are composed of multiple low-power LED chips, which are connected in different combinations according to the design of the lamp, drive efficiency and application occasions. Usually, a driver is used to drive the LEDs in the entire lamp.

(1) Series connection
Since LEDs are current-type devices, they are connected in series (as shown in Figure 1), which can greatly reduce the requirements of the drive circuit. Because the current flowing through the LEDs is consistent, the basic selection of LEDs can ensure that their luminous intensity is relatively consistent. In this way of connection, as long as the polarity of the LEDs is ensured, the LEDs can be arranged in various shapes in the lamp. The connection method is simple and the operation is convenient. But one of its fatal shortcomings is that when one of the LEDs has an open circuit failure, it will cause the entire LED string to go out, which affects the reliability of use. It is necessary to ensure that the quality of each LED is excellent, so that the reliability can be corresponding. improve.

In this connection mode, if a constant voltage LED drive power supply is used to drive the LED, then when a certain LED is short-circuited, the circuit current will increase, and when it reaches a certain value, the LED will be damaged, which will cause all the subsequent LEDs to be damaged. , But if the LED constant current drive power is used to drive the LEDs, when a short-circuit occurs in a certain LED, the current remains basically unchanged, which has no effect on the subsequent LEDs. No matter which way it is driven, once a certain LED is open, the entire circuit will not be lit.

(2) Parallel mode
Connect the LEDs end-to-end in parallel according to the polarity of the LEDs (as shown in Figure 2). The basic purpose of this connection is to ensure that each LED is driven at the same voltage during operation. Due to the LED manufacturing technology and production process, even if the LEDs of the same model and the same specification batch are driven by the same voltage, they cannot be guaranteed to conduct the same current. Therefore, the uneven current distribution of each LED may reduce the lifetime of LEDs with excessive currents relative to other LEDs. As the working time increases, this discreteness will become more and more serious, which will directly cause some LEDs to burn out. This kind of parallel connection circuit is relatively simple, but the reliability is not high, especially when the number of LEDs is large, the possibility of failure is higher.

The parallel connection method requires relatively low voltage, and the efficiency of the drive circuit is not high. Since the forward voltage drop of each LED is different, the brightness of each LED is different, so a very strict sorting of the LED chips is required. If one LED is short-circuited, the entire circuit will be short-circuited, and the rest of the LEDs will not work normally. If a constant current drive is used, the current distributed to the remaining LEDs will increase, which may cause damage to the remaining LEDs, but use constant voltage drive It will not affect the normal operation of the entire LED circuit. This connection method is not suitable for a large number of LED lamps.

(3) Serial-parallel hybrid connection
Serial-parallel hybrid connection is to mix series and parallel (as shown in Figure 3). First connect several LEDs in series, and then connect them in parallel to both ends of the LED driving power supply. When the LEDs are basically the same, use this connection The method makes the voltage of all branches basically equal, and the current flowing through each branch is basically the same. In this way, a suitable combination of LEDs can be used to reduce the sorting requirements for LEDs.

The series-parallel hybrid connection method is mainly used when the number of LEDs is large, because this method can ensure that the LED failure in each branch only affects the normal light emission of the branch at most, which improves the reliability compared with the simple series and parallel methods. . At present, many high-power LED lamps generally adopt this method, which achieves very practical effects.

(4) Array mode
The array connection is divided into several loops for driving. In each loop, the LEDs are connected in parallel and then connected in series (as shown in Figure 4). In each loop, three LEDs are connected in parallel to form a unit, and then three units are connected in series to form a loop. The entire array is divided into three loops and connected to different output terminals. When the three LEDs in a branch are normal, the three LEDs emit light at the same time; once one or two of the LEDs fail and open circuit, at least one LED can be guaranteed to work normally. In this way, the reliability of each group of LEDs can be greatly improved, and the overall reliability of the entire LED can be improved. Using this method requires multiple sets of input power sources, the purpose is to improve the reliability of the LED work, reduce the overall circuit failure rate.