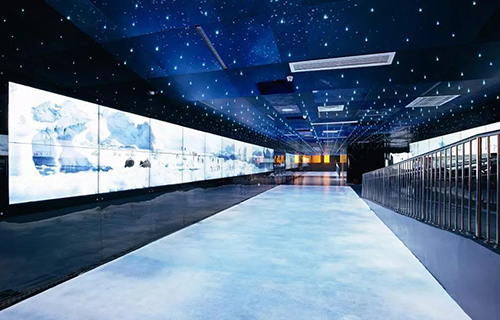 A third party must participate, that is, it must be accompanied by the absorption or emission of phonons during the transition. For non-vertical transitions, on the one hand, it involves the interaction of electrons and electromagnetic radiation, and on the other, it involves the interaction of electrons and crystal lattices. In theory, this is a two-level process, a process with a much lower probability than the vertical transition, so the luminous efficiency of indirect radiation recombination is much lower than that of direct radiation recombination. Ge, Si and GaP, AIAs and AlSb in Group III-V compounds belong to this category. Although the probability of indirect radiation recombination transition is very low, if appropriate impurities are added to this type of material, the recombination probability can also be changed and the luminous efficiency can be improved. For example, the doping of nitrogen or oxygen into gallium phosphide will form isoelectron traps, which greatly increases the probability of recombination of electrons and holes, and significantly improves the luminous efficiency of gallium phosphide, making it an important luminescent material .

(2) Recombination between shallow energy level and main band
The recombination between the main band and the shallow energy level is shown in Figure 2. It can be a recombination between a shallow donor and a valence band hole or a shallow acceptor and a conduction band electron. Because the ionization energy of the shallow donor (receiver) is very small (usually a few millielectron volts), it is often difficult to distinguish from the inter-band transition, but the experiment proves that the photon energy of this radiation is always smaller than the forbidden band width, so It is not caused by inter-band composite luminescence. It can generally be considered as the recombination of holes in the valence band and electrons trapped at the shallow donor level or the recombination of conduction band electrons and holes trapped at the shallow acceptor level. The light-emitting process is first conduction band electrons. It is trapped in a localized energy level, and then the electrons and valence band holes on this localized energy level recombine to emit light. This kind of light emission is also called edge luminescence. Experiments have shown that these localized energy levels may be physical defects (vacancies or gaps) in the crystal.

4) Recombination through deep energy levels
When electrons and holes recombine through deep energy levels, the radiated photon energy is much smaller than the band gap, and the wavelength of the emitted light is far from the absorption edge. For narrow band gap materials, it is difficult to obtain visible light, but for wide band gap materials, this type of luminescence still has practical significance. For example, red luminescence in GaP belongs to this type of composite. In addition to the effects of deep-level impurities on radiation recombination, they are often the root cause of non-radiative recombination, especially in direct-pressing gland materials. Therefore, in actual work, it is often necessary to reduce the deep energy level as much as possible to improve the luminous efficiency.

(5) Exciton recombination
If the semiconductor absorbs photons with energy less than the band gap, electrons are excited from the valence band. However, due to the Coulomb effect, it is still connected with the holes left in the valence band, forming a bound state. This pair of electrons and holes bound together by Coulomb energy is called excitons. The excitons as a whole can move freely in the crystal. Since it is electrically neutral as a whole, the movement of excitons does not cause current. An exciton is an energy system, and this bound state can re-release energy in a radiant or non-radiative manner. If the energy is released in the form of radiation, a light-emitting process can be formed. The excitons may be bound during the movement in the crystal, and the bound excitons can no longer move freely in the crystal. Such excitons are called bound excitons. There are donors, acceptors, donor-acceptor pairs and isoelectronic traps in the centers that can bind excitons in the crystal. For free excitons, when electrons and holes recombine, they release energy to produce light.
In recent years, in the research of luminescent materials, it has been found that the emission of bound excitons plays an important role and has high luminous efficiency. For example, in GaP materials, bound excitons caused by Zn-O pairs cause red luminescence, and bound excitons caused by electron traps such as nitrogen cause green luminescence. These two light-emitting mechanisms greatly improve the light-emitting efficiency of GaP light-emitting diodes, and exciton emission has become the main light-emitting mechanism of this type of light-emitting diode. Therefore, the study of exciton luminescence has attracted more and more attention.