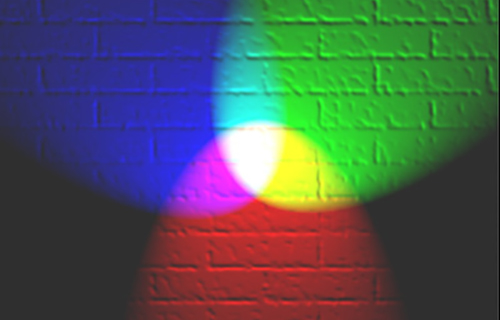 The appearance of white LED has opened a brand new door for semiconductor lighting. At present, more and more indoor and outdoor lighting projects have adopted white LEDs. In just a few years after its birth, the luminous efficiency and power of white LEDs have made great progress. White LEDs have become The main force.

At present, there are three main ways to obtain white LEDs (as shown in Figure 1). The principles and problems are shown in Table 1: The first is to convert the blue light part by phosphor to obtain white light; the second is to use fluorescence The powder converts ultraviolet light into white light; the third is to package LED chips of different colors together, and multi-chips mix to emit white light. Table 2 lists the current types of white LEDs and their light-emitting principles.

(1) Conversion of two primary color phosphors to white LED
The two-primary white LED is made of blue LED chips and YAG phosphors. The emission spectrum is shown in Figure 2. The commonly used blue light chip is InGaN chip, in addition, AlInGaN chip can also be used. The advantages of the blue chip LED with YAG phosphor powder method are: simple structure, low cost, relatively simple manufacturing process, and YAG phosphor powder has been used in fluorescent lamps for many years, and the process is relatively mature. However, this method also has several disadvantages. For example, the efficiency of blue LEDs is not high enough, resulting in low efficiency of white LEDs; phosphors themselves have energy loss; phosphors and packaging materials age over time, resulting in color temperature drift and shortened lifespan.

(2) Three-primary-color phosphor conversion LED
The tri-color phosphor LED can effectively improve the color rendering of the LED under the premise of higher luminous efficiency. The most common way to obtain a three-primary white LED is to use an ultraviolet LED to excite a set of three-primary phosphors that can be effectively excited by ultraviolet radiation. Compared with the method of blue LED+YAG phosphor to obtain white light, the method of using ultraviolet LED+three primary color phosphors is easier to obtain white light with consistent color, because the light color of LED is only determined by the ratio of phosphors. In addition, this type of white LED has high color rendering, adjustable light color and color temperature, and the use of phosphors with high conversion efficiency can improve the light efficiency of the LED. However, the UV LED + tri-color phosphor method still has certain drawbacks, such as the low efficiency of phosphors when converting ultraviolet radiation; powder mixing is more difficult; packaging materials are prone to aging under ultraviolet light, and have a short lifespan.

(3) Multi-chip white LED
The red, green, and blue LED chips (or LED chips of multiple colors) are packaged together, and the light emitted by them is mixed together, and white light can also be obtained. This type of white LED, called multi-chip white LED, uses red, green, and blue to make white light LED chips, compared with phosphors that convert white light, to avoid the energy loss of phosphors in the light conversion process. High light efficiency can be obtained, and the light intensity of different light color LEDs can be separately controlled to achieve a full-color color change effect, and better color rendering can be obtained through the selection of the wavelength and intensity of the LED. The disadvantage of this method is that the semiconductor materials of LED chips with different light colors are very different, the quantum efficiency is different, the light color varies with the driving current and temperature, and the decay with time and the speed are also different. In order to maintain the stability of the color, it is necessary to add a feedback circuit to compensate and adjust the LEDs of the three colors, which makes the circuit too complicated. In addition, heat dissipation is also a major problem that plagues multi-chip white LEDs.