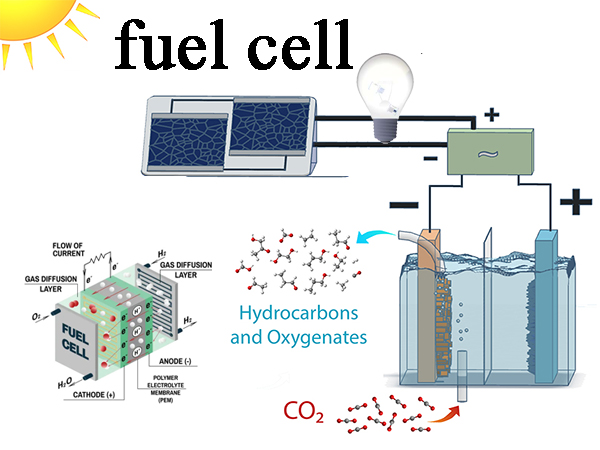 A fuel cell is an energy conversion device that directly converts the chemical energy of the supplied fuel into electrical energy through an electrode reaction. It is a power generation device that can continuously obtain electricity by continuously supplying fuel. The biggest feature of this device is that since the reaction process does not involve combustion, its energy conversion efficiency is not limited by the “Carnot cycle”, and the efficiency of most types of fuel batteries is as high as 50% to 60%. Secondary utilization, the total efficiency can be as high as 80%~85%. As a power source, its actual energy utilization efficiency is 2~3 times that of ordinary internal combustion engines. It has been actively developed in recent years due to its advantages of high power generation efficiency, adaptability to various fuels, and good environmental characteristics.

The hydrogen-oxygen fuel cell device is essentially a “reverse” reaction device of water electrolysis. Hydrogen and oxygen are electrochemically reacted to produce water, and electricity is released. The basic structure of a fuel cell is mainly composed of four parts: anode, cathode, electrolyte and external circuit. The anode is a hydrogen electrode, the cathode is an oxygen electrode, and an electrolyte is between the two electrodes. Typically, both the anode and the cathode contain a certain amount of catalyst to accelerate the electrochemical reactions taking place at the electrodes. Its basic structure is shown in Figure 1.

Proton exchange membrane fuel cell (PEMFC) is a new type of fuel cell developed relatively late, and it is currently the most widely used. The electrolyte is a solid organic membrane that conducts protons when humidified. It generally uses platinum as a catalyst, and the working environment temperature is 60~80 ℃, which is a low temperature fuel cell .

①Hydrogen reaches the anode of the cell through the gas conduction channel on the bipolar plate, and reaches the proton exchange membrane through the diffusion layer on the electrode.

②Hydrogen is decomposed into 2 hydrogen ions (ie protons) under the action of the anode catalyst, and 2 electrons are released.

④ Under the action of the cathode catalyst, oxygen reacts with hydrogen ions and electrons to form water.

⑤ At the same time, the electrons form a current under the connection of the external circuit, and the electrical energy can be output to the load through proper connection. The generated water is discharged with the reaction exhaust gas through the electrode.

The main advantages of proton exchange membrane fuel cell :
①High energy conversion efficiency. Through hydrogen oxidation, chemical energy is directly converted into electrical energy, without the heat engine process, and is not limited by the Carnot cycle.

②Zero emission can be achieved. Its only discharge is pure water (and water vapor), no pollutants are discharged, and it is an environmentally friendly energy source.

③ Low operating noise and high reliability. The PEMFC battery pack has no mechanical moving parts, and only flows of gas and water during operation.

④Easy to maintain. The internal structure of PEMFC is simple, and the cell module presents a natural “building block” structure, which makes the assembly and maintenance of the cell pack very convenient; it is easy to realize the “maintenance-free” design.

⑤ The power generation efficiency is little affected by load changes, so it is very suitable for use as a decentralized power generation device (as the main unit), and also as a “peak-shaving” generating unit (as an auxiliary unit) for the power grid.

Therefore, the fuel cell is considered to be one of the most potential batteries and one of the main partners of the photovoltaic power generation system in the future.