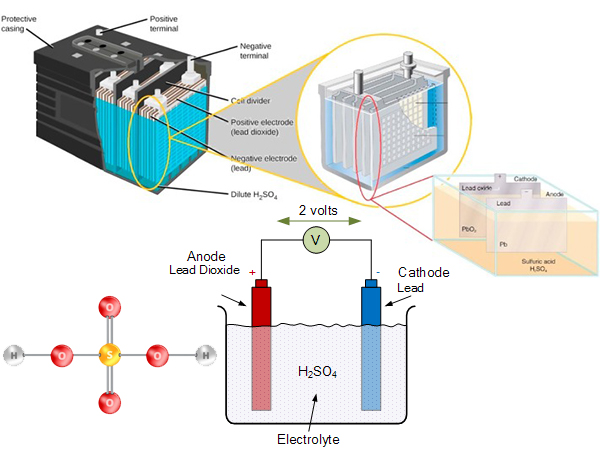 The acid battery refers to the battery whose electrolyte is an acidic aqueous solution. At present, the lead-acid battery is the most common application. A typical lead-acid battery consists of positive and negative plates, electrolyte and electrolytic cell, and its basic structure is shown in Figure 1. The active material of the positive plate of the lead-acid seedling battery is lead dioxide (PbO2), the active material of the negative plate is gray spongy metal lead (Pb), and the electrolyte is a sulfuric acid solution with a concentration of 27% to 37%. When a metal is inserted into a solution containing a metal salt, a certain interfacial potential difference is generated due to the transfer of charged particles between the two phases, which forms the electromotive force of the lead-acid battery.

After a certain concentration of electrolyte is injected into the lead-acid battery, the atoms on the metal lattice of the active material of the positive plate are polarized and attracted by liquid-phase water molecules, and eventually part of the atoms are separated from the lattice and enter the solution in the state of hydrated ions. At the same time, the metal ions in the electrolyte are also partially adsorbed to the surface of the plate metal. The active material (Pb) on the surface of the negative plate dissolves to generate lead ions, and the reaction is as follows
Pb→Pb2++2e

At the same time, lead dioxide (PbO2) on the positive plate of the lead-acid battery reacts with the water in the electrolyte to generate lead hydroxide [Pb(OH)4]. Lead hydroxide is unstable and dissociates immediately to generate tetravalent lead ions. The reaction process is as follows:
PbO2+2H2O→Pb(OH)4
Рb(ОH)4→Pb4++ 4OH–

Lead-acid batteries are cheap, easy to use, easy to maintain, and rich in raw materials. They can be mass-produced and used in large quantities. The disadvantage is that the volume is large, the efficiency is greatly affected by the ambient temperature, and lead is a toxic substance, which is dangerous to a certain extent. At present, the batteries used in photovoltaic power generation systems are still mainly lead-acid batteries.