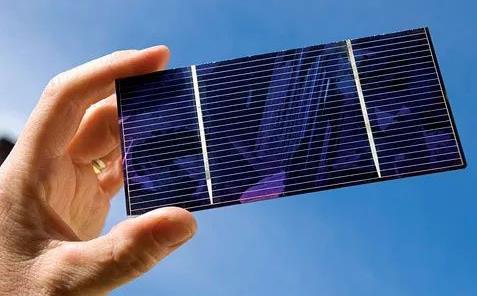 A solar cell is essentially a semiconductor PN junction that can produce photovoltaic effects under sunlight (as shown in Figure 2). Its working principle is: when sunlight hits the surface of the solar cell, the P-type area and N The valence electrons of the atoms in the type region are collided by solar photons, and the photons transfer energy to the valence electrons. When the energy obtained exceeds the energy of the band gap Eg, it can break away from the covalent bond and change from the valence band to the conduction band. A large number of electrons and holes can be generated inside the solar cell. The electrons and holes generated by the excitation of solar photons are unbalanced inside the solar cell and need to be restored to a balanced state through free collision and recombination. The recombination in the same area does not generate current, so there is no conductive effect. However, if the minority carriers generated by light excitation move to the PN junction area, and the spatial electric field generated by the PN junction shifts the minority carriers to the opposite area, a photovoltaic electric field opposite to the barrier electric field of the PN junction can be generated. If you press the external electric field, you can generate electrical energy output. Combining a lot of solar battery units into solar battery modules through series and parallel methods can generate current with a specific voltage output.

In actual solar radiation, the effects of light on solar cells are different. According to the different effects of radiation on solar cells, the effects of light can be divided into five categories (as shown in Figure 3). Type a light is the light that is reflected back on the surface of the solar cell; type b light is the light that is absorbed by valence electrons in the semiconductor unipolar region and forms electron-hole pairs, mainly short-wave radiation with high photon energy , But the formed electron-hole pairs are reduced by recombination before reaching the PN junction; C-type light absorbs and produces electron-hole pairs near the PN junction. These minority carriers generate photovoltaic electromotive force under the action of the PN junction. : Class d light is absorbed by the solar cell, but no electron-hole pairs are generated, only heat is generated to heat the battery, mainly long-wave light: Class e light is the light that directly penetrates the solar cell. Therefore, only C-type light can produce photovoltaic effect in solar cells. Therefore, to improve the photoelectric conversion efficiency of solar cells, increasing the proportion of C-type light is an important way.

The spectral range of solar radiation is relatively wide, and the wavelengths vary greatly from ultraviolet to infrared, so the light irradiated on the surface of the solar cell has different energy and the penetration depth in the cell is also different. Therefore, the solar energy’s absorption efficiency of light energy,Depending on the wavelength of the incident light, the solar cell has a larger absorption coefficient for short-wave radiation, and a smaller absorption coefficient for long-wave radiation. As mentioned above, only those rays whose photon energy exceeds the band gap Eg can excite electron-hole pairs for the rays that radiate into the solar cell, and those rays whose photon energy is less than the band gap Eg cannot be excited. The electron-hole pair can only heat the solar cell itself. The photon energy of short wave is large, so it is easier to excite electron-hole pairs. Therefore, the contribution of short wave to the photovoltaic effect in solar cells is much greater than that of long wave. In addition, some of the electron-hole pairs that have been generated are recombined and reduced in this region because they are far away from the barrier region of the PN junction, which has no effect on the photo-generated current and causes partial loss of light energy. Therefore, the solar energy is converted into electrical energy. Efficiency can only be part of it.

When sunlight radiates to the surface of the solar cell, part of the light penetrates the surface of the object and enters the inside of the cell, and part of the light is reflected back by the surface of the cell. From the perspective of manufacturing high-efficiency solar cells, it is hoped that the reflection on the surface of the cell is as small as possible. Therefore, anti-reflection coating technology or other technologies (such as matte surface technology) are often used in the manufacture of solar cells to reduce the proportion of reflected light as much as possible. Solar cells are usually able to produce photovoltaic effects in the spectral wavelength range of about 0.2~1.25μm (there will be certain differences depending on the solar cell materials). If the band gap of the semiconductor material of the solar cell is 2eV, then only light with a wavelength less than 0.62μm can produce the photovoltaic effect. In solar radiation, the energy with a wavelength smaller than this wavelength is 58% of the total energy. Considering other photoelectric losses, there will be about half of the energy loss, so the conversion efficiency of solar cells made of this material is only about 29% at most. . Therefore, when designing solar cells, the most ideal material should have a band gap of about 1.5eV, and the band gap of the solar cell semiconductor materials actually used is 1.1~2.0eV. The band gap and absorption wavelength of common semiconductors As shown in Figure 5.