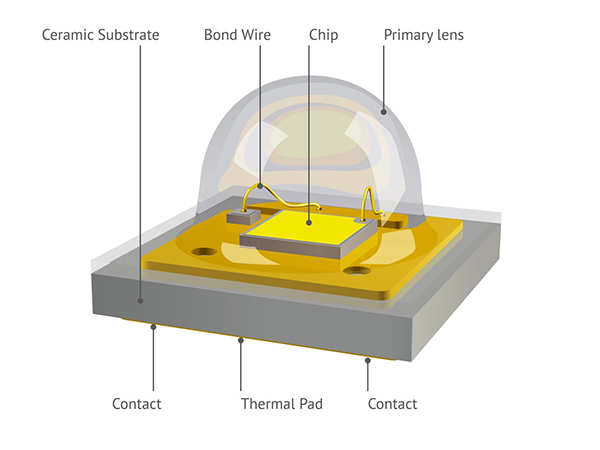 ① LED package form and structure
According to different application needs, LED chips can be made into devices with different structures and appearances through a variety of packaging methods to produce LED products with a variety of light colors and a variety of series, varieties and specifications.
According to the number of built-in chips, LED packaging is divided into two categories: single-chip and multi-chip packaging. The single chip package is suitable for forming a point-emitting lamp; multiple chips can form a surface light source and a line light source, which are suitable for information status indication and display. The light-emitting display is a kind of multi-chip package, through the appropriate connection of multiple chips combined with the appropriate optical structure, directly packaged into different colors of nixie tubes, character tubes and light column displays.
According to whether the package has pins, LEDs can be divided into two types: pin package and surface mount package.

② LED packaging technology type
(1) Leaded package
Most pin LEDs have two pins, anode and cathode, and a few devices that use single-line or dual-line in-line multi-chip packages have multiple pins. Since the first commercial LEDs were put on the market in 1968, with the continuous increase of LED operating currents, their packaging forms have been constantly changing and developing.
Round-head pin LED is a commonly used packaging form. This packaging uses epoxy resin as the encapsulating material. About 90% of the heat of the chip is transferred from the lead frame to the printed circuit board, and then dissipated into the air. The diameter of the epoxy resin lens is 5.0mm, 4.0mm, 3.0mm and 2.0mm, and the range of light-emitting angle can reach 18°～120°. The lens head can be made into an ellipse, rectangle, bevel, triangle, step shape, etc., which can achieve different light distribution requirements to change the color of the emitted light. As the anode and cathode pins, silver-plated copper, iron and other materials can be used.
(2) Surface mount package
The application of surface mount technology (SMT) to LED production began in the 1980s, and surface mount technology is an important form of packaging for LEDs. Surface mount LEDs, like other surface mount devices (SMD), are suitable for automated mass production, and adapt to the development requirements of light, thin, short and small electronic products. Since the emergence of white LEDs, one of the most important application areas of LEDs is mobile phones. As the complexity of mobile phones is getting higher and higher, and the volume is getting smaller and smaller, the requirements for thinner and smaller package of LEDs are put forward.
Plastic leaded chip carrier (PLCC) is an important packaging form for LEDs. The PLCC-2 and PLCC-4 series in surface mount have now become widely adopted industry standards. PLCC usually uses a square plastic material as the housing of the LED. The LED chip is placed in the top groove, and the bottom is sealed with sheet metal pins. It is characterized by compact structure and can be wave soldered or reflow soldered, which is suitable for the requirements of large-scale production. . The LEDs adopting this package form have a large light-emitting angle, and the light-emitting viewing angle ranges from 100° to 160°. If a plastic lens head is sealed on the top of the LED, its light-emitting angle can reach 60°.
The pad is an important channel for LED heat dissipation. The surface mount LED data provided by the manufacturer is measured with a 4mm×4mm pad. The use of reflow soldering can make the cross-sectional area of ​​the pad and the pin equal. The LED adopts a surface mount package, which can avoid the manual insertion and pin alignment process required by the 7-segment digital display. It meets the production requirements of automatic pick-up and placement equipment. The design space is flexible, and the display colors are bright and clear. The multi-color surface mount package has an external reflector, which can be easily combined with the chip, and uses a reflective optical design to replace the traditional transmissive design, which can provide uniform illumination for a large area.
Because the LED adopts surface mount package, it has better solved the problems of brightness, viewing angle, flatness, consistency and reliability, so it has become a hot spot for development.
(3) Multi-chip integrated packaging
At present, large-size chips still have problems such as heat dissipation, uniformity of light emission, and decreased light emission efficiency. Because the small chip technology is relatively mature, a high-density power LED packaged by integrating multiple small-sized chips together can obtain a higher luminous flux. Various high thermal conductivity and insulating interlayer aluminum substrates of chiplet technology are easy to dissipate heat, and are also easy to integrate, which are beneficial to improve the light efficiency and improve the stability of the device. In order to avoid the problem of shading by electrode leads, designing “leadless” chip integration on the substrate is an effective way to improve the light efficiency of small chip integration.
(4) Power LED packaging technology
Power LEDs are divided into two types: ordinary power LEDs (less than 1W) and W-level (watt-level) power LEDs. Among them, W class, especially white light W class LED is the core device of semiconductor lighting in the future.
LED chips and packages are developing towards high-power, producing luminous flux 10-20 times larger than Φ5mmLED under high current. Effective heat dissipation and non-degrading packaging materials must be used to solve the problem of light decay. Therefore, the shell and packaging are also the key Technology, LED packages that can withstand several watts of power have appeared. The 5W series of white, green, blue-green, and blue power LEDs have been available since early 2003. The white LED has a light output of 1871m and a luminous efficiency of 44.31 lm/W. The green light decay problem. The LED that can withstand 10W power has been developed. Tube; size is 2.5mm X2.5mm, can work under 5A current, light output up to 2001 lm, as a solid-state lighting source has a lot of room for development.