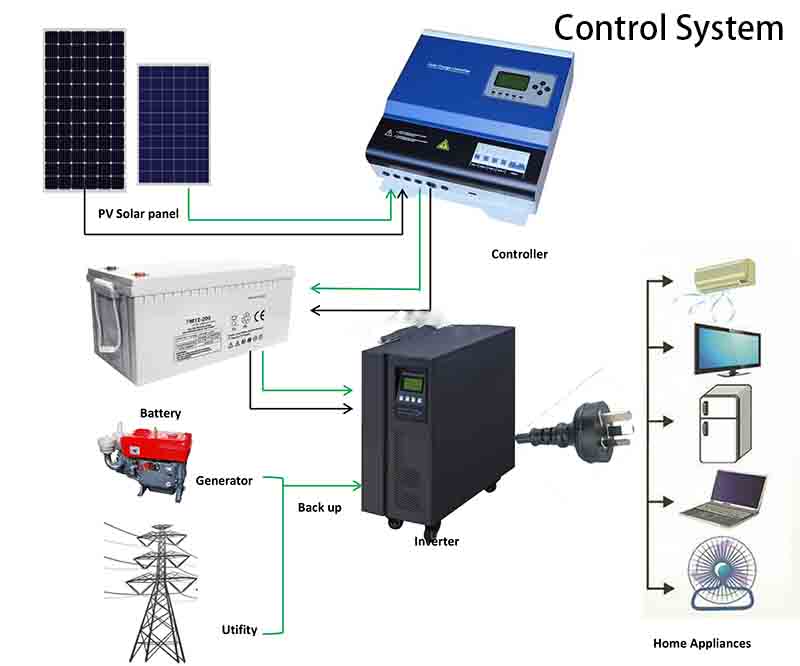 In the independent solar photovoltaic lighting system, the control system defines and controls the charging and discharging conditions of the battery, and controls the power output of the solar cell components and the battery to the load according to the power demand of the load, which is the core control part of the entire system. A reasonable control system can ensure the normal operation of the independent solar photovoltaic system, and ensure the reliability and prolong the service life of the system.

In an independent photovoltaic power generation system, an energy storage battery must be equipped to collect and store the electricity generated by the solar battery, regulate the discharge of the battery when it is necessary to supply power to the load, and also need to control the power supply of the load, so the control system is independent The core control component of the solar energy system. At present, the batteries used in solar lighting systems, mainly VRLA batteries, need to be controlled during the charging and discharging process. Frequent overcharging and overdischarging will affect the service life of the batteries. Overcharging will cause a large amount of gas (electrolyzed water) from the battery, resulting in water loss and active material falling off; overdischarge will easily accelerate the corrosion and irreversible sulfation of the grid. In order to protect the battery from being damaged by overcharge and overdischarge, the control system must regulate the battery and the load to prevent overcharge and overdischarge of the battery. Most of the time, this control system can be made into an independent device called a controller. The most basic function of the controller is to monitor the voltage or state of charge of the battery, determine the capacity of the battery, and determine the instructions to continue charging, discharging or terminating charging and discharging according to the detected parameters, so as to avoid excessive charging and discharging of the battery. Would you like to know more about battery life? go now.

With the development of independent photovoltaic power generation systems, the requirements for the rationality of system operation status and operation mode are getting higher and higher, and the safety of the system is also more prominent and important. The functions of the controller continue to increase and develop towards intelligence. Now the controller not only has more protection and monitoring functions, but also can control the load, so that the early battery charge and discharge controller has developed into today’s more complex system controller. The controller has also been greatly developed and improved in terms of the control principle and the components used. At present, the advanced system controller has used a microprocessor to realize software programming and intelligent control.

The main functions of the charge and discharge controller in the photovoltaic power generation system are as follows.
①High voltage (HVD) disconnection and recovery function: The controller shall have the function of input high voltage disconnection and recovery connection. For example, for an on/off controller, when the input voltage exceeds the maximum charging voltage of the battery, it can be disconnected to prevent the battery from being damaged due to overvoltage charging, and the connection can be restored when the voltage drops to the floating voltage.
②Low voltage (LVG) alarm and recovery function: When the battery voltage drops to the low voltage alarm point, the controller should be able to cut off the power supply to the load to avoid excessive discharge of the battery and affect its life.
③ Low voltage (LVD) disconnection and recovery function: This function can prevent over-discharge of the battery. Connect the load through a relay or electronic switch, which can automatically cut off the load at a given low voltage point. When the power and voltage rise to a safe operating range, the load will automatically reconnect or require manual reconnection.
④Protection function: circuit protection to prevent any load short circuit; circuit protection to prevent internal short circuit of the controller; protection against reverse discharge of the battery through the solar cell module at night; circuit protection to prevent the reverse polarity of the load, solar cell module or battery; Line lightning protection of induction lightning.
⑤Temperature compensation function (only applicable to battery full voltage): When the battery temperature is lower than 25℃, the battery full voltage should be appropriately increased; on the contrary, the battery full voltage threshold should be appropriately lowered when the temperature is higher than this temperature. Usually the temperature compensation coefficient of a single battery is -(3~5) mV/℃.

Read more: What is a VRLA battery and what are the characteristics of its construction?