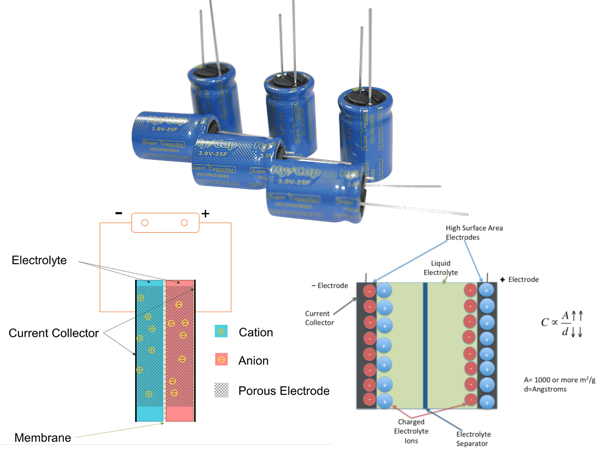 Supercapacitors are also called electrochemical capacitors. Its performance is between ordinary capacitors and batteries. It has excellent pulse charge and discharge performance and high-power energy storage performance. Because of its large stored energy, light weight, and multiple charge and discharge A new type of energy storage device. At present, there are many kinds of super capacitor and capacitor products, but most of them are based on a similar electric double layer structure. Super capacitors are very similar in structure to electrolytic capacitors. Their main difference is the electrode material, as shown in Figure 1. shown.

The electrode materials used in supercapacitors include activated carbon, metal oxides, conductive polymers, etc. The electrolytes are divided into two types: aqueous solvents and non-aqueous solvents. The former has good conductivity, while the latter has a wide range of available voltages. When the practical application requires high current and short-term charging and discharging, supercapacitors will be an ideal choice. It can be used together with other types of batteries and play a complementary role.

The stored electrical energy of supercapacitors is 20 to 1000 times that of ordinary capacitors. It improves energy storage by using a porous electrolyte and increasing the area of ​​the bipolar plates. supercapacitor

Conventional capacitors have the advantages of high power density and high charging energy density, fast charging and discharging, long service life, and not easy to age. The disadvantage is still that it is expensive and the energy is not large enough. However, it can be expected that the supercapacitor battery will be one of the most promising power storage devices in the photovoltaic power generation system in the future.