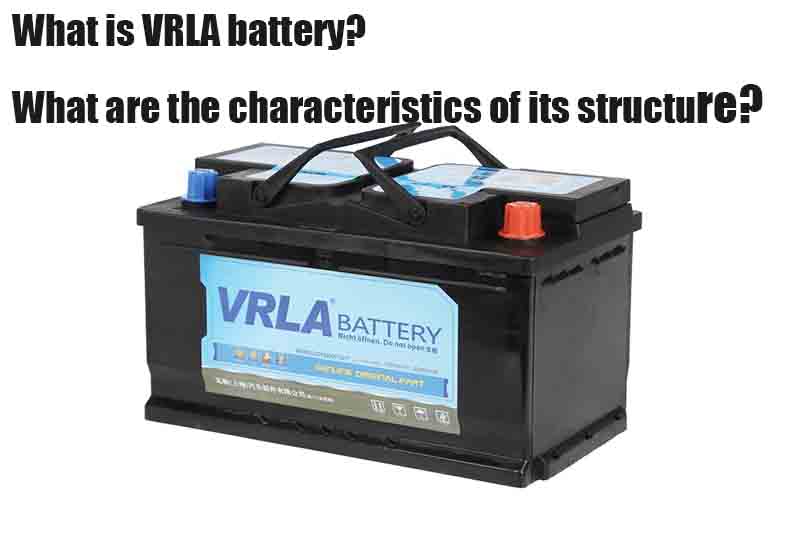 Generally, the so-called VRLA battery refers to AGM battery. Compared with the original lead-acid battery, it has made the following improvements.

① The new grid material grid, also known as substrate or framework, is used to support active substances and conduct current. The positive and negative grids of traditional lead-acid batteries are made of lead antimony alloy (antimony content 4% ~ 10%), while the positive and negative grid materials of VRLA batteries have been improved. Generally, the negative grid adopts lead calcium alloy to improve the hydrogen evolution overpotential, and the positive grid uses lead based multi-element alloy to improve the electrical characteristics.

③ Lean liquid design the function of traditional lead-acid battery separator is to prevent the short circuit of positive and negative plates and the diffusion of harmful impurities. Its material is microporous plastic. AGM battery uses ultra-fine glass fiber to make the separator. In addition to ordinary functions, it can also store sulfuric acid electrolyte. Most electrolytes are adsorbed in ultra-fine glass fiber, and a small part is adsorbed in the positive and negative electrodes, so that there is no flowing electrolyte in the battery, which is convenient for the use and maintenance of the battery.

At the end of charging, the reaction on the electrode of lead-acid battery is as follows.

Therefore, it is unavoidable for lead-acid batteries to produce H2 and O2 during charging, and the combination of these two gases must be carried out under catalytic conditions.

In order to make VRLA battery produce less gas during charging and discharging or re combine the gas into water, it needs to be solved from the following aspects: first, maintain the high overpotential of hydrogen precipitated on the cathode and the high overpotential of oxygen precipitated on the anode. Therefore, it is necessary to improve the purity of raw materials, that is, reduce the harmful substances in lead and sulfuric acid; Second, adopt reasonable charging method and low floating charge voltage; The third is to make the hydrogen and oxygen re synthesize water back into the electrolyte. In the actual design, VRLA battery also needs to use the principle of oxygen recombination to realize sealing, and the following reactions occur: oxygen precipitates and diffuses from the positive electrode to the negative electrode to generate PbO, and PbO reacts with sulfuric acid to generate lead sulfate and water.

In fact, the proportion of the above reactions is very low, and more oxygen consumed on the negative electrode is carried out through direct recombination. The hydrogen precipitated from the negative electrode can not be completely combined, so a one-way throttle valve needs to be used to relieve the pressure to ensure the safety of the battery.

The charging method of VRLA battery involves how to fully charge the battery, reduce overcharge, reduce undercharge and prolong service life. In terms of maintaining capacity, high initial current is beneficial. Overcharge is reduced as much as possible, so as to reduce water loss and maintain the activity of positive and negative substances. Pulse charging can overcome the influence of oxidation. Therefore, a good charging method can not only maintain the capacity of VRLA battery, It can also significantly increase the cycle life of the battery.

At this stage, the initial charging of VRLA has the following ways.

① Series charging: high voltage and small current chargers are used. Generally speaking, the output voltage of the charger is 300 ~ 450V and the current output is 5 ~ 30A. The current can be controlled. The charge of each battery can be controlled. It can discharge, detect the battery capacity and eliminate faulty batteries. This method is widely used by manufacturers.

③ Series parallel hybrid charging: generally, it is carried out in series first and then in parallel. The charger usually has a voltage output of 150V and a current of 30 ~ 100A. A single battery has no voltage and current control and can be discharged and checked in groups. Now many manufacturers use this method.

④ Single battery charging: it can accurately charge and discharge, control current and voltage, and classify and select each battery. It is widely used in testing.

⑤ Module control single battery charging: each module can charge 64 batteries, and each charger can charge more than 700 batteries. In one module, the failure of one or more batteries will not affect the charging of other batteries. Constant voltage and constant current control can be carried out to ensure that the batteries will not be overcharged. It can also check the capacity and classify the batteries, which will be the development direction in the future.

When VRLA battery is floating charged, the voltage and current settings are low, so the gas evolution and grid corrosion are not serious. Most floating charges adopt constant voltage floating charge, and the setting of each monomer is generally about 2.20 ~ 2.27v. For the battery pack, the voltage of each single battery is different during floating charge. The battery with high saturation is at a higher voltage and precipitates gas. The battery with low saturation is at a lower voltage due to the deoxidation of oxidation. The negative pole of these batteries is in danger of not being fully charged. After floating for a period of time. The voltage of each single battery will be gradually balanced, but the discharge result of the battery may not be satisfactory.

If the set value of floating charge voltage is increased, the battery life will be shortened. If the battery is in a high temperature environment, there may be the risk of thermal runaway. The reasonable method is as follows.

① Separate from the equipment for charging. If there are two sets of batteries, charge the batteries alternately. For a group of batteries, the short-term charging is generally 2.6v/cell, which ensures that the charging of each cell of the battery pack is balanced, and then floating charging is carried out after standing still for a period of time.

In the field of recycling applications, VRLA batteries adopt thin plate design to improve specific energy and high current performance. The best charging method for thin plate VRLA battery is pulse and current decreasing charging. Pulse mode can quickly fill with high input current in a short time, with little overcharge; The current decreasing method has the same advantages, but the method is completely different. The key to high current fast charging is the composite process, which provides sufficient current and overwhelms this process. When the battery is aging, the composite efficiency becomes more and more intense, but the electrode plate is thin, the surface area is large, the electrode plate spacing is small, and the charging efficiency is high.

In order to avoid premature failure of VRLA battery, the VRLA battery shall be strictly maintained and the switching power supply shall be set in strict accordance with the relevant setting parameters provided by the manufacturer. At ordinary times, the floating charge voltage shall be adjusted in time according to the operation of the battery and charging equipment to make the floating charge voltage meet the requirements of vr-la battery and avoid the loss of water caused by overcharge of the battery due to excessive voltage; At the same time, the low voltage can prevent the under charging of VRLA battery and the sulfation of battery plate, which greatly reduces the capacity of the battery. The advanced operation equipment has the function of temperature compensation and can automatically adjust the operation parameters according to the operation environment.

Read more: what is the lead-acid battery of solar LED system?