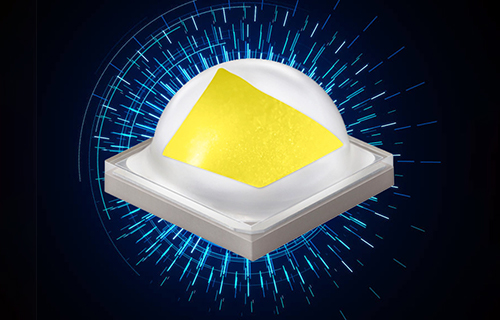 With the continuous development of material technology, the design and manufacturing technology of commercial lighting-level LEDs has made considerable progress. LED manufacturing mainly includes chips, phosphors, optics, packaging, and electrostatic protection. The production of semiconductor materials for GaN has been greatly improved from traditional methods, such as the use of laser lifting methods to remove substrates. The current power-level mainstream chip size is: 350mA current adopts (350×350) μ㎡, 1A current adopts (1×1) m㎡. At present, chips with higher power and size are also beginning to appear. Generally, high-power chips are usually packaged with 4 to 6 chips. The ideal driving voltage of the chip is about 3V, because the bandwidth of GaN is 2.7V, its luminous efficiency is about 50%, the thermal power consumption of (350×350)μ㎡ chip is about 0.5W, (1×1)m㎡ chip The thermal power consumption is 1.5w, which is equivalent to a few hundred watts per square centimeter. Therefore, heat dissipation management in LED is very important, which is related to the working life and internal quantum efficiency of the LED. Although corresponding heat dissipation measures will be taken, the operating temperature of the LED will still be around 100°C. If the unpackaged LED chip is directly operated under the rated current, it will melt in a few minutes. Therefore, the entire design and manufacturing process must be guided by heat dissipation management, from the uniformity of PN junction current injection, series resistance and band design to packaging, heat dissipation must be considered. At present, the driving voltage of GaN-based LEDs with a higher manufacturing level is 3.15V at a current of 700mA, and the corresponding series resistance is 0.64Ω. Figure 1 shows the light output of two-wavelength thin-film flip-chip multi-quantum well InGaN LEDs. And the characteristics of external quantum efficiency. It can be seen from the figure that in the high-power direction, as the power increases, the external quantum efficiency of the LED will decrease, which is mainly due to the increase in the injected current and the Joule heating effect.

(1) Formal installation structure
As shown in Figure 2, this structure is usually epitaxially grown on sapphire, and finally an electrode is placed on the upper part. The setting of the cathode is to etch the P-type semiconductor layer on the surface and deposit the electrode directly on the exposed N-type semiconductor layer. Due to the poor conductivity of the Mg-doped P-type semiconductor layer (conductivity is about 1Ω·cm), a larger anode is required to ensure the uniformity of current injection. The current method is to deposit a large-area electrode layer on a P-type semiconductor. In order to increase light emission, the deposited electrode layer is semi-transparent. Obviously, such a structure will cause a sharp decrease in the external quantum efficiency due to the absorption of light by the electrode layer. In addition, from the perspective of the electrode structure, the uniformity of current injection is also very poor, which will cause the current to be locally crowded and cause the thermal resistance to rise and generate hot spots, which will ultimately affect the heat resistance and life of the LED. However, the processing technology of this method is relatively simple, and early power LEDs all adopted such a structure.

(2) Flip chip structure
As mentioned earlier, the adoption of the front-mounted structure affects the light extraction efficiency of the LED and the uniformity of current injection. In the LED chip of the front-mounted structure, to increase the power of the chip, the injected current must be increased. In order to prevent the chip from being overheated and affect the performance and life, the size of the translucent P electrode must be increased. Absorption leads to a reduction in the amount of light taken out, and it is difficult to improve the efficiency of the chip. Using a flip chip (Flip chip) structure as shown in Figure 3, the large-size P electrode is made of high-reflectivity metal, and light passes through the substrate to emit light, and the reflection of the light by the bottom electrode can effectively enhance the light extraction efficiency.

The flip-chip structure of the LED needs to be bound to materials with high thermal conductivity, such as silicon and ceramics, to ensure that the heat sink is closer to the PN junction, so that the heat can be better discharged. The flip-chip structure has no connections on the upper part of the chip, making it more flexible in terms of packaging.

(3) Vertical structure
In the LED with a vertical structure as shown in FIG. 4, the P electrode is arranged on the bottom surface of the entire LED, which can ensure the density and uniformity of current injection. The N electrode is arranged on a very small part of the center of the top surface of the chip, and is usually made of silicon-doped GaN. Its conductivity is very good, and the current can be distributed on the entire surface of the LED. Therefore, using such a structure can have a relatively uniform current density and a relatively strong power output.
In the vertical structure of the LED, usually the light-emitting surface can also be planted to improve the light extraction efficiency. Such a structure can effectively reduce the thermal resistance, the heat extraction effect of the PN junction is ideal, and the heat dissipation performance is good. However, with such a structure, since the N electrode is on the top, it is troublesome to perform the phosphor packaging process after binding the wires, and the position of the N electrode will produce light-emitting shadows.